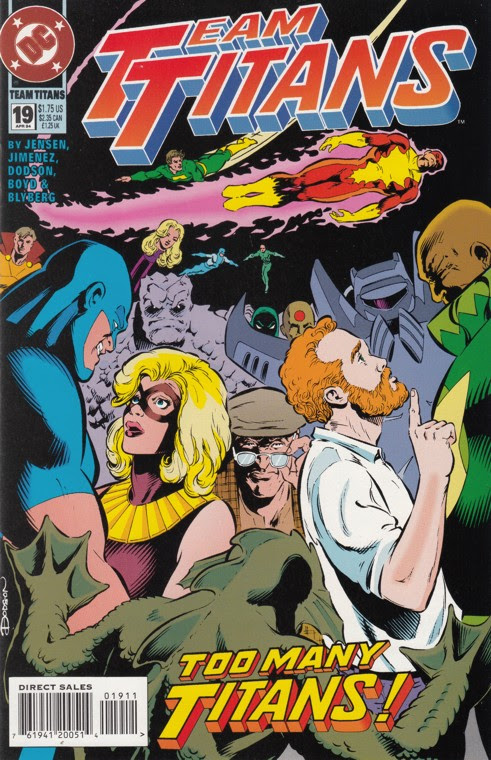 Team Titans is an anagram of Steam Taint.

I never learned the proper use of prepositions, or what they even are, because it's the most unlistenable to Schoolhouse Rock song.

Hmm, that was more of a tweet than the opening line to (of?) a review of (for?) a comic book from (in?) 1994. But then again, it's also a good example of how my reviews work. A thought strikes me based on something I just read or wrote, I have six thoughts more as the pinball in my brain bounces off of several bumpers, until I finally get control of the ball by resting it on an upraised flipper. Then I aim the ball and shoot it up the "Schoolhouse Rock Song" ramp and score the jackpot. I'm left feeling satisfied while everybody who just walked in and missed all the bumper action that lit up the jackpot are left thinking, "What the fuck is this asshole talking about?"

From now on, I'm only going to speak in pinball analogies. Or is the lesson actually, "Write more of your process, dumbie!"? Schoolhouse Rock also never did a song about punctuation inside and outside quotation marks so I'm never going to be any good that that shit either.

Avengers: Endgame has a good example of how I just write stuff that makes me happy without explaining why I'm writing that stuff. Without actually spoiling anything, there's a scene where some Avengers go to pick up Thor at his house in New Asgard. Taika Waititi's alien character lives with him and he's playing Fortnite. He begins to complain that some guy named SlutBanger called him a dick or something. At that moment, being a huge fan of Liz Lemon's terrible ex-boyfriend Dennis Duffy whose Xbox username is SlutBanger on 30 Rock, I now can't not think of 30 Rock as part of the Marvel Cinematic Universe. So instead of going on Twitter and explaining my theory on how 30 Rock has been incorporated into the Marvel Cinematic Universe and providing the SlutBanger evidence, I simply began tweeting things based on the assumption that everybody now understands it to be true. I could probably benefit from making my process more transparent. 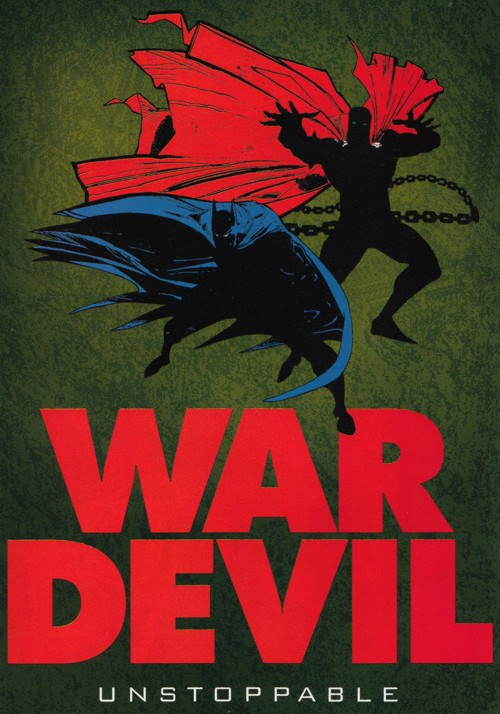 Getting around to the comic book, a Team Titans team called Spectrum have arrived from the future to return the central-to-the-plot Team Titans back to 2001. I hate them immediately. One of them is all, "You deserve answers! But let's start with introductions!" Then instead of introducing herself as a person would when they say something like, "Let's start with introductions," she tells Terra that she's Terra, and Prester Jon that he's Prester Jon. And then when Terry is all, "Wait a second! That's not how introductions are done! What's your name?", she's all, "I don't have a name — I'm a color!" Well how about I just call refer to you as Fuck Off, You Stupid Puke Green Piece of Shit? Not that Terry Long would ever say anything like that! He's a wuss! Remember an issue or two ago when he was crushed by a grandfather clock? Hilarious!

Later, one of the Spectrum refers to one of the other Spectrum as "Green." So I think they indeed have names! Jerks.

I don't want to embarrass anybody who worked on this comic book but one of the creative team might be an idiot.

Spectrum have been traveling through time collecting all of the members of the Team Titans (that's like thousands and thousands of characters!). Now, to prove that they're not lying about working for the mysterious leader, they need to bring all of the Team Titans together. Hopefully these characters will be more creative than what the writers of Bloodlines came up with. Let's see, there's Carpet Boy, Lapidus, Wonder Boy, The Enforcer, Murder Master, and Hero X. So, um, nope. No more creative.

All of the Titans from throughout time head off to battle Lazarium, Lord Chaos's spy who has become the DC Universe's version of Rupert Murdoch. He's kidnapped Killowat to steal some of his power so that he can time travel back to 2001 and take over Lord Chaos's throne.

This whole Lazarium plot exemplifies why I can rarely identify with the bad guy (unless it's Lobo because I was also super cool and had long hair and looked hot in jeans and wanted to kill my entire species. Representation matters!). Lazarium's ambition has garnered him a life full of money and power. He could just build an evil lair and retire to play video games when he's not getting adult massages from in-house professionals. Instead, he's created this life so that he can accomplish some other stupid fucking thing that doesn't seem any better than the life he currently has. Why would he want to take over Lord Chaos's role in a future where everybody rebels against Lord Chaos? Who are these people who need to constantly introduce more drama into their lives? You're living the life, Lazarium! Take it fucking down a notch now and enjoy it!

Lazarium explains his plans like a good villain while Battalion, Redwing, Donna, and a comatose Nightrider have been detained by the government. It's a good thing Prestor Jon and his nearly infinite new powers is coming to rescue them.

Prestor Jon has spent every panel since he returned exclaiming how he needs to find his sister, Redwing. He loves her so much and he wants to make sure she's safe and he'd do anything for her and he'll destroy anybody who gets in his way! It's all been so touching and he's been so passionate and it's all been one big fucking batch of twaddle.

"Ew! Your ears and fingernails got pointy! Gross! Get away from me!"

Prestor Jon has an elastic body that's actually disgusting and he's over here judging Redwing's cute new affectations? Hell, even if he wasn't elastic, he'd be a hypocrite for finding Carrie gross now. He does realize he's a ginger in his new body, right?!

I should apologize to people with red hair and fair complexions but right now I'm drunk with the power of judging people on superficial differences! Is this what it feels like to be an incel online?! "Oh, nobody will fuck me, hunh?! Well, I wouldn't fuck you! Even if I had the choice! Which I don't! It's right their in my embraced nomenclature: involuntary celibate! But that's beside the point! People who are good looking enough to get fucked are shallow garbage monsters! What must it feel like to be just the other side of totally disgusting?! If only I were marginally less repugnant than I am! But it's impossible! In this society, there's no way a 1 or a 2 can pretty themselves up to a slightly fuckable 3! And don't encourage me to fuck other 1s and 2s! Gross!"

Hmm. Maybe I need to apologize to both incels and gingers now. Although my mocking incel rant was just encouragement! Don't accept being unfuckable! Do something about it! And that something isn't read a book about how you need to trick women into sleeping with you! That something is doing the best you can at cleaning up, dressing, acting like a civilized person, and just enjoying things you enjoy around other people. You also have to, in some way, prove that you're a responsible person who has something to offer. I once flirted with a woman all weekend at a party in some remote location without anything more than friendly banter. Then on the way home, the car I was driving home (a friend's girlfriend's car because she probably knew it was a deathtrap!) got a flat and we wound up stranded on 580 all night (because she had a spare in the car but no jack). In the morning, I got out of the car with the tire and flagged down a helpful man. His jack was the kind you slide under and the car was a low Camaro that it wouldn't fit under. The guy explained he had to get to work but since he was the only person to stop, I was all, "Please! We'll get this!" I then got my other friend there to lift one side of the front of the car as I lifted the other and we were able to get the jack under. I then preceded to change the tire in a few minutes and we were on our way. My friend said X (the woman I'd been flirting with!) didn't take her eyes off me the rest of the drive home. I dropped her off first and she practically forced her phone number on me. That's what impresses people you might want to impress: doing things that aren't meant to impress them. You just have to prove you're a capable human being who can get shit done when that shit needs getting done. She probably thought, "Look at the way he took control of the situation! Look at how he lifted up that car's front end and changed the tire so smoothly and quickly! I bet he fucks!"

I mean, she was wrong. I was terrible at fucking then! Really, really terrible! But that's a story I don't want to talk about! Even though it's a really short story.

The final page of this comic book has a TV Guide mock-up for DC Comics if they were shows. Here are the actors the editors at DC thought should be playing their characters in 1994:


Index of Star Trek: The Next Generation Reviews