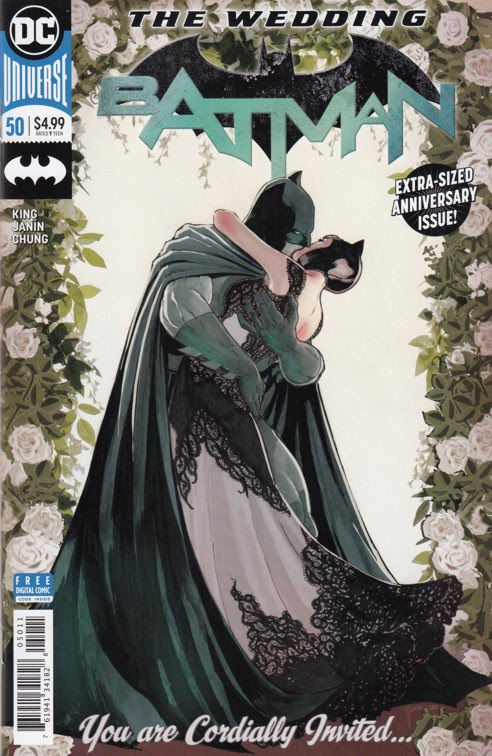 Why is this an anniversary issue? Does DC not know how years work? Or weddings?

(If you want to know my thoughts on the Prelude to the Wedding story, you can read them HERE.)

I can't wait to get to the end of this comic book and think, "Well, that's that! Batman and Catwoman are now happily married and will be until one of them dies in a horrible bat-boating accident!" I'm overjoyed for them, taking this romantic step into a gloriously joyous future laced with dozens of annoying bat and cat babies! I hope Batcow gets to be the ring bearer!

The Joker has been trying to stop this wedding in every way he knows how because he wasn't invited. The big dumb-dumb should have just purchased a copy of this comic book like I did! It says I'm cordially invited right there on the cover! What does "cordially" mean, anyway? Doesn't it mean "injected with alcohol"? 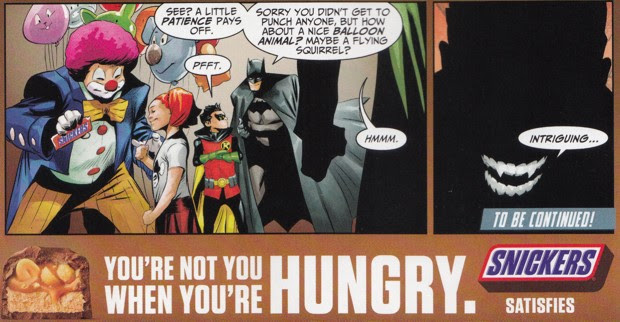 Fact: Snickers' vampires grow their canine teeth in the wrong place. No wait. The fact is the artist of this piece is a dolt.

The story begins with Kite Man getting the crap kicked out of him by Batman and Catwoman because Tom King's hard on for Kite Man is legendary. It's so big and thick and veiny! I wonder what part of Kite Man Tom King likes best? Is it the kite part? Or the man part?

"Isn't it 'the' Joker, Grunion Guy?" you probably aren't now asking. But if you were, I might have to remind you that there are three Jokers in the DC Universe. Nobody has really elaborated on that too much. Maybe nobody was ever meant to. Perhaps it's just an easy way for DC editors to answer huge nerd critics of their comics.

Huge Nerd Critic: "How come the Joker wasn't act...."
DC Editor: "THERE ARE THREE OF THEM! CHRIST YOU NERDS ARE GETTING ON MY LAST TIT!"

Batman finds a judge for the marriage ceremony. His name is Wolfman and he's known as the Raping Judge. Not because he's into rape! That's a terrible thought and nobody should think it. It's because he's named after Marv Wolfman who is totally into rape.

Catwoman's witness for the marriage (her and Batman each get to bring one) is Holly Robinson. Not the Holly Robinson of 21 Jumpstreet fame (is she still famous for that? Or is she famous for marrying Barry Sanders?!) but the one that murdered all of those people who Catwoman was blamed for murdering. She has to break her out of Arkham for the experience. Batman should be totally cool with that and definitely won't be thinking, "What the hell?! How many times do I have to tell her, 'No crime! Bad kitty! You're going to be punished for sure!'" Then he'll think about her whip and smirk a bit and think, "Oh yeah. I see why she keeps doing crime now."

If you read that last paragraph and began developing a hot take on what I'm not saying around the words I am saying, just stop now. I'm just reporting what Batman was probably thinking. I'm not agreeing with his need to control Catwoman's thoughts and actions! That's all Bruce Wayne, baby!

The issue is made up of a lot of pin-ups by various artists. Laid out over the pin-ups are Batman and Catwoman's words. They're probably their vows but since I'm not done reading, that's just a guess. Anyway, the layout, where everything is kind of a mirror of the opposite page, is pure Tom King which probably pissed off all the Tom King haters. "He's just repeating everything in that way that means nothing except he's trying to be smarter than us! Why the fuck does he have to use form?! And tones?! And theme!? What's wrong with Batman punching stuff for eight pages straight?! So obnoxious!"

I began this review with the joke that the wedding obviously won't work out. This is comic books. Everybody read that initial paragraph and rolled their eyes and thought, "Yeah. We know this is a huge farce. It's going to end in disaster." But how many of you thought, "Grunion Guy probably really means what he's writing here. The big fag." First off, such language! Come on, imaginary reader. Be better! Second, I did mean it. I do mean it. I really hope that Tom King surprises us and he allows Batman and Catwoman to be happily married. Why not for as long as he's writing this book? Why can't they have part of their middle story be one where they get the joy of being together? Who is that going to harm?!

So now you know my secret. No, not that I'm a big fag! Sheesh. You people are terrible. I mean, yeah, that's my secret! But I wouldn't word it that way, you gross jerks.

Selina and Bruce have their big wedding kiss in the exact middle of the book which can't be a good sign for how it's going to end. I mean, they haven't had the wedding yet! They just get all dressed up and then meet, right in the middle, right there on the staples (okay, not exactly because the staples come the page before. But I blame an error in the layout of the advertisements. I see what you were trying to do, Tom King. I got you!). The big loving embrace. The big kiss in their wedding finery. The moment they knew was coming. And hopefully not the last moment they were happy. Don't you dare, Tom King, with your shitty mirror image story telling that everybody hates (I mean, not me! Just the dumb critics!), do that mirror thing with this story. Don't you begin hopeful, get to a middle that's the peak of happiness, and then descend into chaos, despair, and destruction! DON'T YOU FUCKING DO IT, TOM KING! 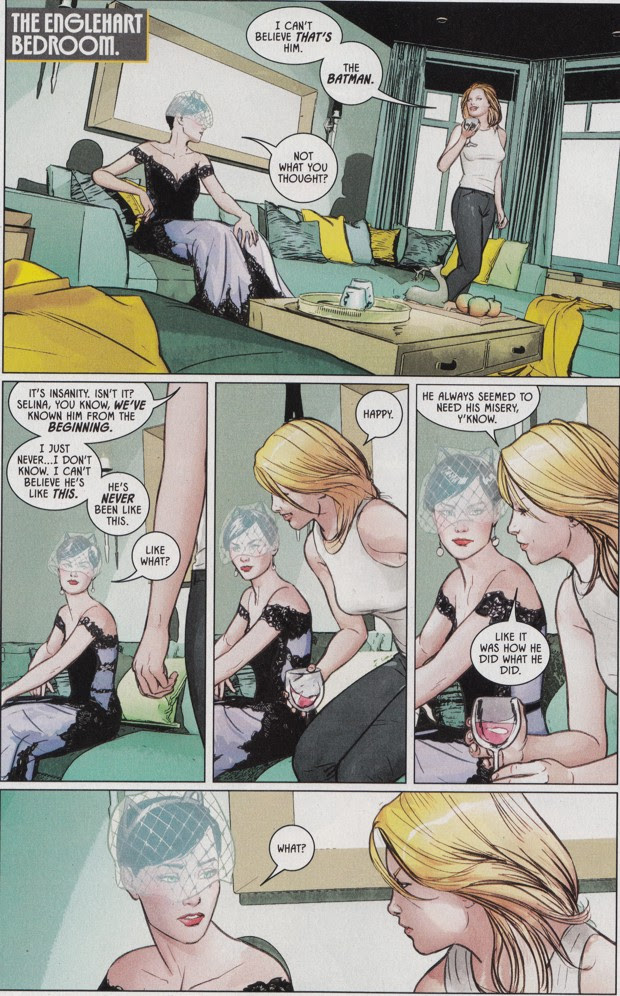 This is the page immediately after the big kiss (and the pin-ups, of course! Every two page spread of story is followed by two pages of pin-ups and wedding vows). Things are already tumbling down the story's climactic peak!

Of course Alfred is Batman's witness. Even Alfred knew it would be him but he was too polite to assume so he still gets emotional when Bruce asks him. Or, rather, casually tells him like it's no big deal.

On the subject of the pin-ups: they tell the story of Batman and Catwoman across DC's history. It even feels like, in many cases, they use artists chronologically along the way (there are obvious places where this doesn't hold up. But it, mostly, feels fairly close to the mark). They even eventually get to the New 52 on the roof sex scene, and the recent double date with Clark and Lois. It's really quite sweet.

The wedding vows have a lot to do with one partner's thoughts on the other partner's eyes. It's romantic but not in that way that makes me think, "Oh boy! At the end of these vows, they're going to declare their undying love for each other!" The tone feels more like they'll cause me to exclaim, "Oh no! It sounds like they're both reaching the conclusion that maybe they shouldn't get married! But they'll still probably keep up the tradition of fucking on rooftops!"

Also, I'm nearing the end and not a single whiff of Batcow.

As Selina and Holly head to the wedding, Selina mentions that she's currently writing Batman a letter. So that's what the "vows" have been. Her letter. And Batman's letter to her (I'm assuming on the next page which I have yet to read, he'll confess to Alfred that he's also been working on a letter!). Both of which, as I mentioned in the previous paragraph, seem to be heading to the conclusion that neither one will want to go through with the marriage because they feel it will go against, and possibly change, the very nature of the other person. So. You know. Shit.

And so, Selina declares, in her letter, that she can't marry Batman because it will kill him. And Bruce declares in his letter, that maybe he can become somebody happy. Maybe he can change. Which isn't exactly what I expected. I thought they would both agree. So, at least, Tom King surprised me on that level. And, apparently, that was the point since Holly goes back to Arkham to discover Bane and a bunch of other people who have been highlighted in Tom King's run (along with Poorly Shaved Batman. I don't remember if that's somebody or if that's Batman and this is all a hallucination of some kind or maybe Tom King is speaking through Bane or maybe...well, I don't know!). Bane says, "The Bat is broken," (which is a terrific pun that somebody once thought up and now Batman writers can't stop using!).

Rating:: I guess giving Batman hope that he can be happy and then taking it away is supposed to break Batman? But isn't the whole point that Batman's unhappiness and grim misery and obsession over justice are the only things keeping him Batman? Won't this devastating loss just make him even more Batmanier?! Or do the members of Batman's rogue's gallery all believe he's going to become a pouting emo baby for the next few months? A total pushover which they can take advantage of?! Anyway, it was a good story well told. The only flaw was that the staples were off by one page. Stupid layout editor! Somebody should fire whoever's job it was to place the ads!
Posted by Lizard at 7:09 PM No comments: