Nearing forty and it's really beginning to dawn on me how little time I have to get in everything I want to do every day. I haven't been reading much the last few years because I've been spending that time writing. Or playing video games. Or sleeping. Or watching Netflix streaming. Or leaving the house for various reasons. Or who knows what else. But I read two books in the last week (Salmon of Doubt by Douglas Adams and Childhood's End by Arthur C. Clarke) and would like to keep up that kind of pace. Maybe one book per week. I have a library within walking distance, so maybe I should get a card before I start spending tons of cash at Powell's on Hawthorne.

Sometimes I think I need to start a time budget so I can make sure I actually get the writing and reading parts of my life in gear. I can't begin to imagine how people with full time jobs have any time to do anything they'd really like to do. Here's hoping that my 18 hour a week that pays like a 40 hour a week job never disappears.
Posted by Lizard at 4:57 AM No comments: Links to this post

I think Joe Friday is a big liar. He's supposed to be showing us why policemen should be trusted but he can't even give us straight facts. In Episode 2, The Big Explosion, he claims that every day, 1000 new people crowd into Los Angeles and that 3 Million People were there before them.

Then in Episode 5, The Big Masked Bandits, he states that the city is home to only 2.5 million people and that only 5000 more crowd in every month as opposed to about 30,000 as he claimed earlier!

I'm starting to think he's just making everything up as he goes.

Super Dragnet Fact #1: The stories are based on true events. And you can tell that this isn't just some bullshit because of the high level of detail Joe Friday goes into about every aspect of the story, from the traffic routes to the time tables of events to the description of everybody involved. No writer could make up all of that great detail!
Posted by Lizard at 5:12 AM No comments: Links to this post

A Little Bit About Me #1

I love to sneeze.

I wonder how many people die every year from accidents caused by sneezing?
Posted by Lizard at 3:23 PM No comments: Links to this post

This is probably going somewhere

History is the hardest of all knowledge to hold on to. People record history with cultural bias and utilize descriptions crippled by the limited scientific knowledge of the current time. People hide disgraceful or shameful events so that future generations will never know of them. History is easily lost. Science and technology are used every day and improved upon from generation to generation, thus making it harder to lose the knowledge. History only records events. And when records are changed or destroyed, when the people living in the current time have long since gone and the history they knew never passed on to their progeny's progeny, history is forever lost, changed, or willfully ignored.

History has also been hampered by the ability to keep records safe. And those records that do survive can only be read through translations which can never perfect or bring forward the true, exact meaning or intentions of the writing. Much guesswork and supposition will be inherent in the translations of these documents, especially in cases where the transcriber of the recorded event did not have the words to describe that which he was witnessing. This leads to the writer tending toward the use of metaphor, simile, or his own assumptions and guesses and naive perceptions of events. Science and technology do not tend to have this problem. Even if advanced methods of doing something are lost for some time, they can always be rediscovered because math and science are not specific to culture, language, or time.

In this day and age, we have so many people meticulously writing about any current event that future generations will have the opposite problem. They'll have many differing accounts and opinions to wade through to try to get to the heart of the matter. But at least they should know what was happening to a greater degree than we have today of far past civilizations. Which is sort of what I was thinking about.

Most people would think it silly and unbelievable to think that aliens have ever actually visited out planet. But how would we really know when ancient South American Civilizations described the Spanish as Gods? How much myth and how much religion was created whole-cloth from the imagination in order to answer spiritual and metaphysical questions plaguing ancient people? And how much of it could be historic observations of alien civilizations visiting our planet during civilizations infancy?

Could not the idea of Angels have come about as the only way ancient man could conceive of humanoid beings who fly through space? The wings would be the artistic metaphor to show that these beings could fly and that they came from the sky as opposed to men who actually had wings. Could not creation myths and stories of Gods have come from beings who showed such strength and power and marvelous tools that the simple minds of earth's inhabitants had no way of describing exactly what they were seeing?

Could the idea of an end of the world conflict in which the divine creator comes done from the heavens to save the righteous and slay the wicked be a promise and not a prediction? What if alien beings had foretold that they would be watching and they would save the people of Earth if they ever grew to bring about their own destruction? Wouldn't that mean that the hastening of another world war (as many fundamentalist Christians and Muslims might see as a good thing) not bring about the descending of higher beings to the earth because it is predicted but because they promised to come if things ever got so out of hand that mankind was about to destroy itself?

What would be interesting is that this concept, over time, of a promise to help had become, to Man, a prophecy that will eventually come true. In this case, some might seek to hurry it along since they see no hope that it will never happen. And yet looked at in the view of a promise to help if things got that bad, we would see that we don't ever need to get to that point.

Perhaps all of the Egyptian mythology, if written with the scientific knowledge and technological language we have today, would become clear and understandable as something real and material instead of metaphorical and spiritual. Perhaps the Norse Myths are just telling the same stories but through their own cultural bias, environmental settings, and Nordic language. Maybe all ancient civilizations were visited by the same people but could only tell the tale in the only way they knew how.

Or perhaps all religious texts and creation myths, stories of Gods and ancient heroes, are all just stories.
Posted by Lizard at 6:06 AM No comments: Links to this post

How do people plan their lives? How does one go about it? If life is like a maze, never knowing what will be around any approaching corner, how do you stick to your plan? How do you find your way? Perhaps you hurry through the inevitable wanderings, arterials, and dead ends, since they're easily recognizable as not part of the plan. But what if they newly found path is more entertaining, more magical, more interesting than the path you've already chosen for yourself? Do you throw away your initial plan? Do you write up a new one? Do you throw in the towel or rally against fate or God or the universe? Do you throw your arms up to the sky in defeat or defiance?

How does one go on with life when life doesn't care about your plan?

I've never had a plan. Perhaps, now 40, that was a mistake. But I had dreams. Maybe it's time to start following those instead of simply wandering.
Posted by Lizard at 9:34 AM No comments: Links to this post

The first two parts can be found here. That was a long time ago.
Posted by Lizard at 3:49 PM No comments: Links to this post

I told my dad that when I lived in Santa Clara, I climbed over the fence of the Carmelites across the street from the old house and took a stone frog from their bird bath.

He said, "Good for you! I always wanted to climb in there!"

My dad was proud that I stole from nuns.

(If you're a nun from the Carmelites or a police officer from Santa Clara, this post has been a work of short fiction)
Posted by Lizard at 2:11 PM No comments: Links to this post

I was in some weird refugee camp when a Mexican guy entered the camp and sat by me smiling. A number of versions of him entered and sat down by other people, whispering in their ears. I looked at him quizzically and he said, "Watch this."

An older woman entered the camp and began walking up to the people being whispered to. She'd touch them gently, smiling, and move on. She came to me and took my hand. She began to walk off but before letting go of my hand completely, her smile faltered. She looked concerned and held my hand a bit tighter. She looked down at me and said, "Tell me about your pet."

"My pet?" I said as she said the same thing at the same time, laughing. "He's black and fuzzy?"

"No, tell me about him. He's very affectionate, isn't he?"

"He is. He loves head scratches and when you take your hand away, he'll grab it with his paw and pull it back to him. I call him my familiar. He's very much like me. He's quite aware of his surroundings and quick to learn things to his advantage."

"Would you kill him to save the world?" she asked me seriously.

"No," I told her and she looked sad and moved on.
Posted by Lizard at 9:42 AM No comments: Links to this post 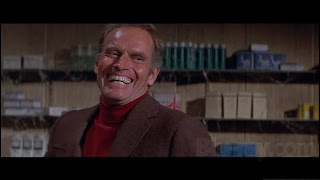 Here was her joke: "Birth control."
Posted by Lizard at 8:17 AM No comments: Links to this post 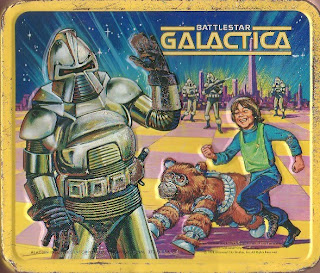 What a nice guy! I don't remember the episode that featured the Picnic with the Cylons.
Posted by Lizard at 10:59 PM No comments: Links to this post

My cat is staring at me

Stop it. Stop staring at me! Go away. Thank you.
Posted by Lizard at 4:51 AM No comments: Links to this post